State-owned enterprises in many economies are supported financially by governments. It may be hard for policymakers to force SOEs to adhere to a fixed budget, leading to bailouts via government transfers or write-offs of bad debt owed to state banks -- what Kornai (1979) famously referred to as the soft budget constraint. It is straightforward to see how easy access to capital benefits managers of badly-run SOEs, but little is known about why those running state banks willingly provide credit to these troubled firms.

Conventional wisdom is that state banks lend to SOEs because they are compelled to do so by the government, and loan officers happily oblige because the government takes eventual responsibility for any SOE defaults. By studying the loan portfolio of a large Chinese state bank during the period 1997 -- 2010, my coauthors and I show that bank managers may have their own incentives to lend to SOEs, as such lending provides an easy way for them to meet lending targets that are also common in banking --- state or otherwise. 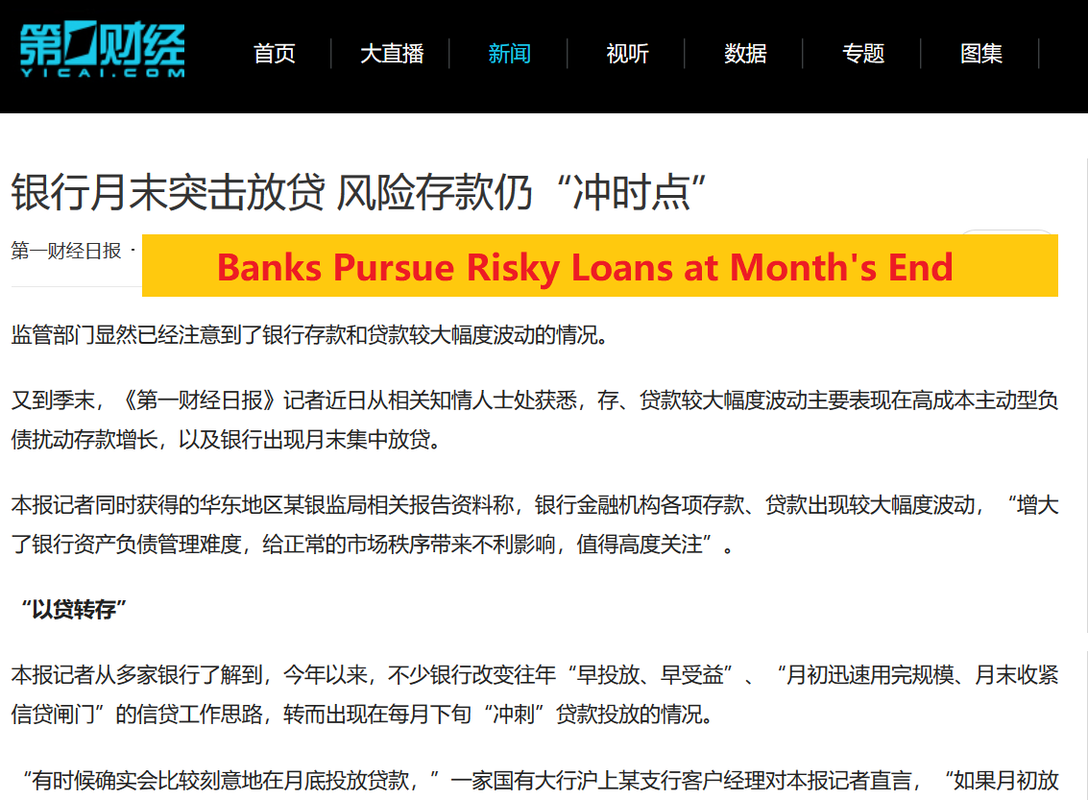 Source: yicai.com (Link)
During the period we study, Chinese banks, both state-owned and private ones, were reported to use month-end loan quotas to motivate branch managers. We show that these incentives led to very strong monthly cycles in both the quantity and quality of lending in our data. The estimates imply an overall end-of-month lending increase of about 92 percent, and a month-end loan is more than 1.1 percentage points (8 percent) more likely to be classified eventually as a bad loan.
Turning to the composition of lending over the monthly cycle, we document that, while the end-of-month increase in bank lending appears for both SOE and private borrowers, the quality decline is driven primarily by loans to SOEs. The patters we document suggest a pecking order, with bank managers turning to (higher-risk) SOEs as needed to meet loan quantity targets, while maintaining relatively high standards for non-SOE lending. As a result, SOE's soft budget constraints may thus have a counterpart in state banks: a ``soft incentive constraint'' as a result of ready (and forgivable) opportunities of lending to SOEs.

The consequences of softer incentives for the quality of loans to SOEs may have a substantial impact on overall productivity because of the lower efficiency of SOEs: a back-of-the-envelope calculation suggests that total factor productivity for the Chinese economy overall is 2.5% lower as a result of soft lending constraint that we document.